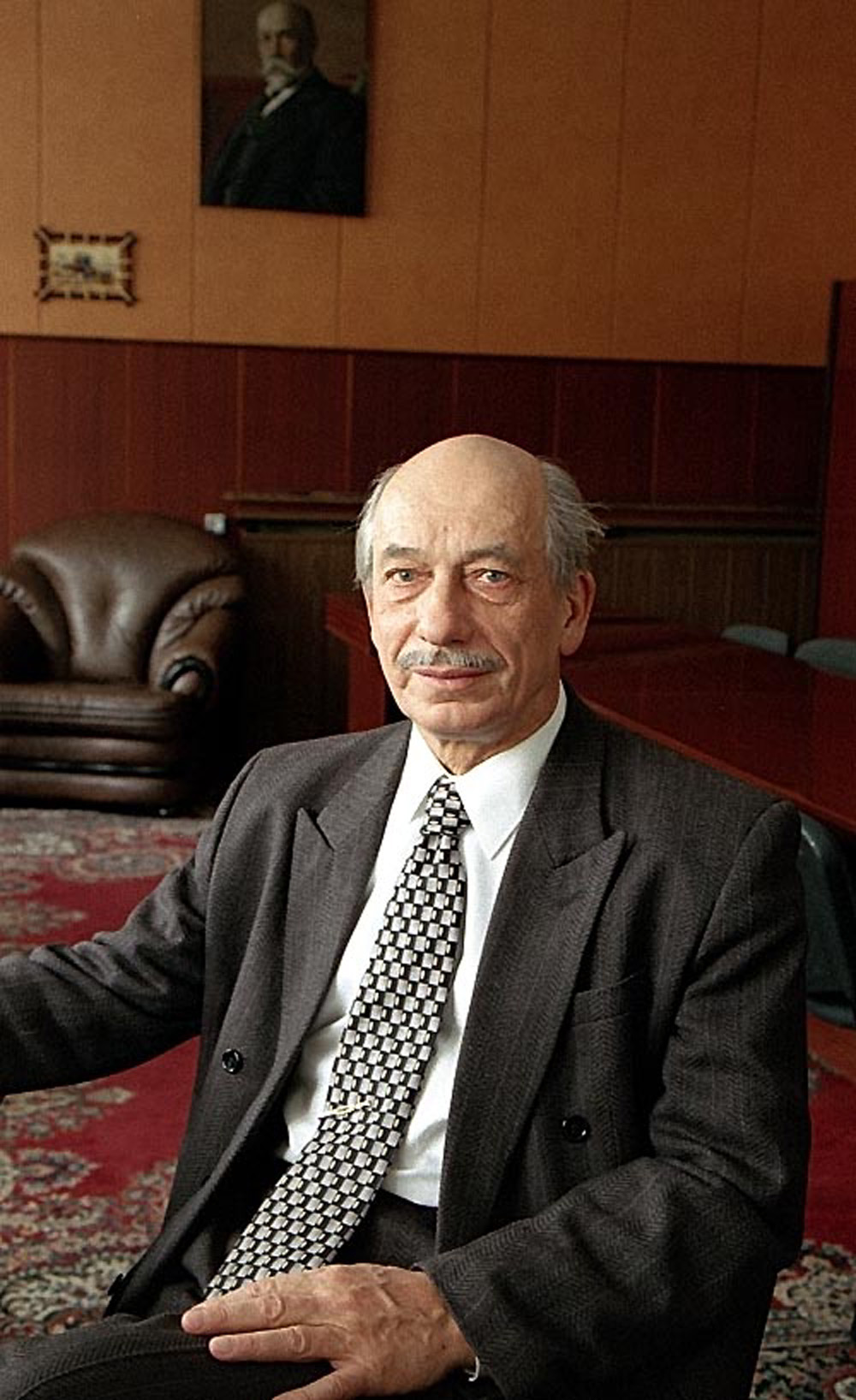 E-mail: This email address is being protected from spambots. You need JavaScript enabled to view it.

History of the laboratory

The laboratory was founded in 1960 under the name laboratory of organic synthesis by the corresponding member of Russian Academy of Sciences Mikhail F. Shostakovsky and Professor Alexander S. Atavin, disciples of Academician Alexey E. Favorsky.

The research interests of the lab were focused on acetylene chemistry. Among the objects of the investigations were vinyl ethers of polyatomic alcohols, cyclic acetals, vinyl sulfides and acetylenic alcohols.

· Using kinetic isotope effect of deuterium it has been shown that hydrolysis of vinyl ethers proceeds via protonation of the double bond instead of the oxygen atom;

· The first environmentally benign mercury-free technology for the production of acetic aldehyde via vinyl ethers of ethylene glycol and methyldioxolane has been realized on a pilot plant in Temirtau, Kazakhstan (60th of the XX century);

· Superbase-catalyzed addition of organic disulfides to acetylene has been discovered.

In 1970 the laboratory was reorganized to laboratory of unsaturated heteroatomic compounds. From that date till the moment the laboratory is headed by Professor, Full Member of RAS Boris A. Trofimov (photo 1):

Major accomplishments of B.A. Trofimov and his scientific school:

B.A. Trofimov is an author of 43 monographs and chapters in monographs, 70 reviews, over 1300 major papers (full list of publications outnumbers 2700 including more than 540 Russian and foreign patents). Promoter of 86 Ph. D. and 29 D. Sc. (habilitated) belonging to his school.

Winner of the State Prize of The Russian Federation for the great contribution to organic synthesis, development of innovation technologies, drug design and creation of novel materials (2012);

67 employees including 16 Dr.Sc. (habilitated) and professors and 38 Ph.D.

· Novel atom-economic addition reactions of СН-acids (mainly, ketones) to acetylenes and their closest derivatives (propargylic and allenic chalcogenides) in superbase media are developed. Efficient and environmentally benign methods for the preparation of unsaturated and/or functionalized carbonyl compounds of aliphatic and aromatic series are elaborated on the basis of these reactions. Methods for identification, isolation and application of key intermediates of these reactions, alkali metal dienolates, are worked out. Novel one-pot methods for the synthesis of essential functionalized heterocycles, pyrroles, isoxazoles, pyrazoles, imidazoles, are designed. Mechanisms of the reactions found are studied both experimentally and theoretically.

· New highly efficient versions of cross-coupling of electron-deficient haloalkynes with electron-rich heterocycles in the presence of nontransition metal oxides without solvents are developed. An expeditious palladium-free alternative of the Sonogashira reaction, allowing combining the acetylene fragment with heterocyclic systems, which earlier did not tolerate this reaction, is elaborated and introduced into fine organic synthesis.

· A new strategy for the synthesis of 3(H)-pyrroles (highly reactive isomers of pyrroles due to the absence of aromatic conjugation), hitherto hardly accessible but potentially promising compounds, is developed. Fundamentally new approaches to the synthesis of scaffold structures comprising the pyrrole and pyridine rings are designed. New expedient versions of the pyrrole synthesis from ketones using synthetic equivalents of acetylene (vinylhalides, haloethanes instead of free acetylene) are elaborated. Novel modifications of the superbase catalytic media, including heterogeneous and nanostructured, are created. The chemistry of functionalized pyrroles, e.g. synthesis of dipyrrolyltriazole and dipyrrolyltetrazine ensembles, condensation products of pyrrolylcarbonitriles with hydrazine, is progressing.

· A new general strategy for functionalization of aromatic heterocycles involving zwitterions, carbenes, and vinyl carbanions, adducts of electron-deficient acetylenes with main sites of reagents, is developed.

· New direct reactions of elemental phosphorus with acetylenes, alkenes and arenes, aryl-and hetarylhalogenides in the superbase systems are elaborated and areas of application of these reactions expand. One-pot environmentally benign chlorine-free (phosphorus halogenides-free) methods for the synthesis of earlier hardly accessible organic phosphines, phosphine oxides and organophosphorus acids are worked out. These products are ligands for metal complex catalysts of the new generation, valuable solvents for stabilization of nanosystems, components of advanced nonflammable materials and nonflammable electrolytes for lithium batteries.

· A methodology for the synthesis of directly functionalized biopolymers and their hybrid nanobiocomposites from vegetable feedstock is developed. Novel pharmacologically active substances and innovative materials for critical technologies are designed.

Self-organization of acetylene and ketone molecules in the presence of the superbases leading to stereospecific cascade assembly of new complex heterocyclic systems, analogs of known insect pheromones, has been discovered. The reaction allows diverse aromatic and heterocyclic substituents to be introduced into the pheromone skeleton thus offering fundamentally new possibilities for organic synthesis on the basis of simple and available starting materials. The self-organization discovered originates a new concept of directed synthesis of biologically active agents and precursors of materials for advanced technologies.

A general efficient methodology for the base-catalyzed stereoselective vinylation of ketones with acetylenes has been developed. The methodology provides a short-cut to β,γ-unsaturated ketones of E-configuration, intermediates for further chemical transformations, drug design and optoelectronic materials.

Within the framework of this methodology, an unprecedented diastereoselective one-pot assembly of hexahydroazulenones, biologically and pharmaceutically important fused bicyclic systems, from2-alkylcyclohexanonesand arylacetylenes, has been discovered.

A general methodology for the synthesis of secondary and tertiary propargylic alcohols of aliphatic, cycloaliphatic, aromatic and heteroaromatic series has been developed. The methodology comprises organocatalytic alkynylation of aldehydes and ketones with acetylene (under atmospheric pressure) and its monosubstituted derivatives in the presence of original catalytic composition Bu4NOH/H2O/molecular sieves/DMSO. Yields of the target products reach 90%.

The methodology paves a convenient, facile and green (metal-free) avenue to a number of acetylenic alcohols thus essentially expanding the scope of their application as valuable building blocks in fine and industrial organic synthesis to produce fragrant substances, vitamins, pheromones, environmentally safe insecticides, as well as inhibitors of steel acid corrosion and nonionic multi-purpose surfactants.

A new general method for the synthesis of pyrroles from ketones and hydroxylamine in the KOH/DMSO system in the presence of dichloroethane as acetylene equivalent has been elaborated. Conversion of the ketone reaches50-95%,unreacted ketone is recovered as oxime upon treatment of the reaction mixture with aqueous alkali solution.

The method allows to circumvent the existing restrictions related to application of acetylene in laboratory and industry, thereby principally expanding the possibilities of synthesis of pyrroles, important building blocks and precursors of drugs and materials for advanced.

Unprecedented stereoselective opening of the imidazole cycle under the action of functional acetylenes in the presence of water to afford (Z,Z)-1,4-diaza-2,5-dienes bearing pharmacophore functional groups has been revealed. The compounds synthesized are novel potent drug precursors and building blocks for multi-purpose fine organic synthesis. The new reaction is entirely atom-economic and does not require catalysts. The results obtained expand fundamental facets of imidazole and acetylene chemistry, since for the first time aromatic imidazole ring is opened under unusually mild conditions (45-60оС) with high efficiency (up to 80% yield) and 100% stereoselectivity at both olefinic centers. The reaction is proved to proceed via zwitterionic intermediates, adducts of imidazole with acetylenes.

It has been shown for the first time that vinyl carbanions of zwitterionic type, formed upon the attack of tripyridylphosphine at electron-deficient acetylenes, trigger a new stereoselective synthesis of hitherto unknown functionalized vinyldipyridylphosphine oxides. The reaction proceeds in water without catalyst upon slight heating with cleavage of theC-Pbond and abstraction of the pyridine molecule. Isomerically pure vinyldipyridylphosphine oxides represent promising ligands for metal complex catalysts, drug precursors and semi-products for organic synthesis.

· Unexpected direction of the reaction of cyanoacetylenic alcohols with adenosine: a route to pharmacophore molecules (Scheme 8)

The tandem reaction of cyanoacetylenic alcohols with adenosine is found to proceed under mild conditions (50 mol% of K2CO3, 20-25оС,4-30 h, DMFA) in an unexpected direction: not nitrogen atoms (formally the most basic and nucleophilic), but two vicinal hydroxyl ribose groups react with the triple bond, and the regioselective tandem reaction completes with the formation of 1,3-dioxolane cycle.

A general methodology for the synthesis of new class of highly efficient boradiazaindacene (BODIPY) fluorophores (in up to 90% yield) has been developed. The synthetic protocol comprises the reduction of available trofluoroacetylpyrroles, condensation of the alcohols formed with pyrroles, oxidation of dipyrrolylmethanes and complex formation of the products with boron trifluoride.

New fluorophores may find application in the design of supersensitive nanosensors, in optoelectronics and biological researches.

A direct reaction of element phosphorus with2-bromomopyridinehas been accomplished for the first time. The reaction affords tris(2-pyridyl)phosphine, in-demand (but still hardly accessible) ligand for the design of metal complex catalysts, unique supramolecule coordination compounds for high technologies and pharmaceuticals. The reaction proceeds in multiphase superbase catalytic system KOH-DMSO and represents the first example of nucleophilic aromatic substitution with participation of the supernucleophilic nano-sized clusters formed upon disassembling of at “dismantling” of element phosphorus macromolecules under the action of activated hydroxide-ions.

The results obtained fundamentally to chemistry of phosphorus, heteroaromatic compounds and metal complexes, as well as to the theory of nucleophilic aromatic substitution.

Close congeners of the diselenophosphinates synthesized are employed for the preparation of semi-conducting nanomaterials, nano-structured selenium and represent polymerization regulators (“RAFT agents”) and biologically active compounds.

An approach to the direct synthesis of new highly efficient antimicrobial agents has been elaborated. The approach is based on the idea that silver nanoparticles are encapsulated in the polysaccharide macromolecules, which represent natural food for microbes. 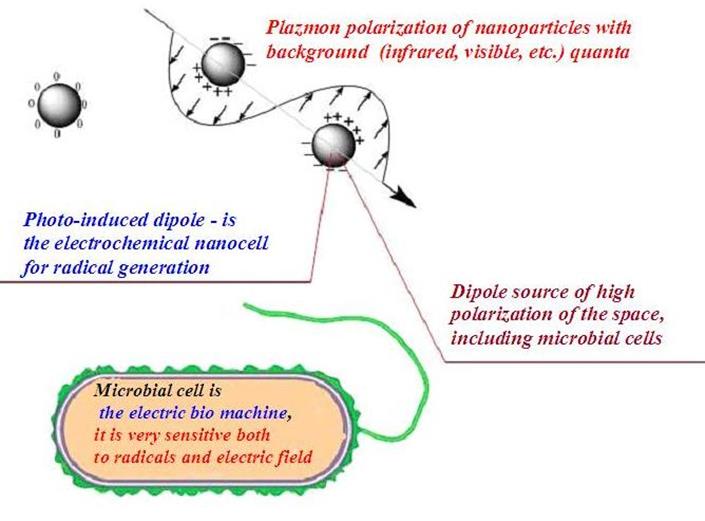 · Grant of the President of the Russian Federation (№ MK-3775.2004.3) to support researches of young Ph.D. in the field of “Chemistry, new materials and chemical technologies” was awarded to S.N. Arbuzova (2004).

I. Grants of Russian Foundation of Basic Research

IV. Grants of Siberian Branch of the Russian Academy of Sciences